This week was a flurry of activity, beginning with Governor Abbott visiting our offices and concluding with our quarterly State Republican Executive Committee meeting on Saturday. A full report on Saturday’s SREC meeting is included below. 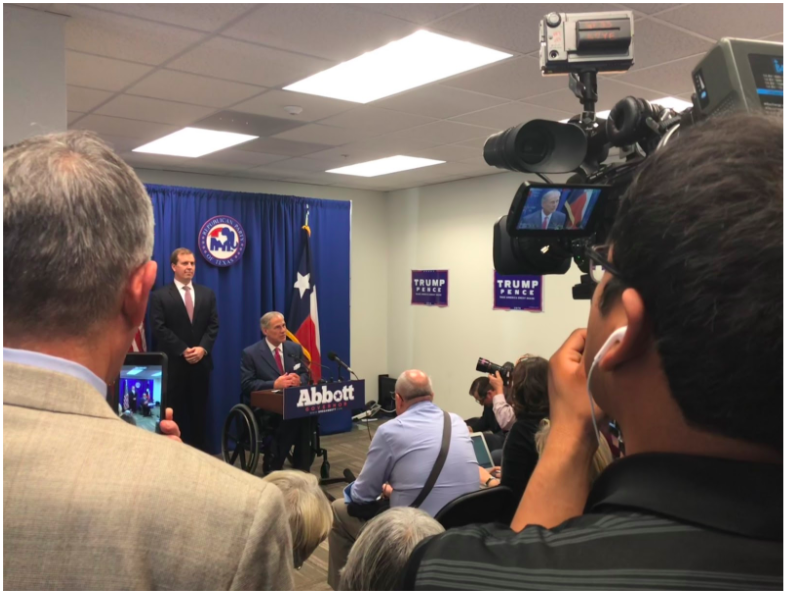 Governor Greg Abbott used Republican Party of Texas headquarters for a press conference Monday afternoon. Governor Abbott announced Jimmy Blacklock will be nominated to replace Justice Don Willett on the Texas Supreme Court. Justice Willett is nominated to become a member of the U.S. Fifth Circuit Court of Appeals and is expected to be confirmed by the Senate in the coming weeks.

On Friday, Governor Abbott hosted RPT staff, SREC, and other RPT leaders at the Governor’s Mansion for the annual Christmas party. 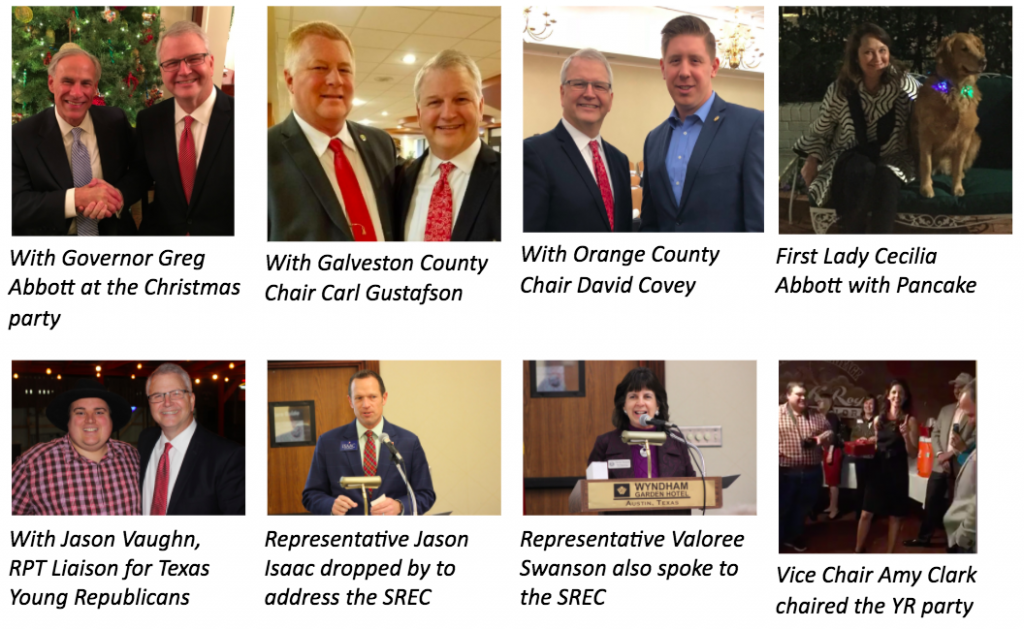 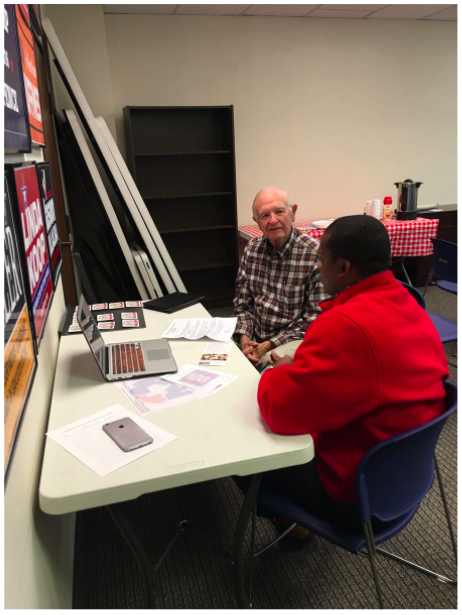 The field team was back for its first full week following the Thanksgiving holiday, and didn’t miss a beat getting back to business. Our Regional Field Directors conducted 41 meetings with new and already active volunteers to expand their team heading into 2018; gathered 200 petition signatures; held 2 house meetings; and knocked on 900 doors. This hard work now will set us up for success when we drastically increase goals in the new year.

At this past weekend’s quarterly meeting, the State Republican Executive Committee accomplished several critical items of business. Perhaps the most anticipated agenda item was the wording for ballot propositions that will be on your Republican Primary ballot this coming March. State law gives the SREC sole authority to develop these, and we selected a record-breaking 11 items to include this time – view them here. These are non-binding ballot initiatives that gain valuable data on the position of primary voters on high profile issues.

The SREC also considered a resolution to censure State Representative Byron Cook under Rule 44 in the RPT Rules. It received 35 votes in favor and 16 against, falling short of the 43 votes required to meet the “two-thirds of the full SREC membership” threshold and trigger the application of the penalties in the Rule.

Our treasurer Larry Hicks reported on our financial standing, after which the SREC approved the 2018 Budget that the Officials Committee has been developing. In November we received more large dollar donations than any other month since July of 2016 and we had the highest total donations received since October of 2014. This is an encouraging trend that I look forward to continuing. 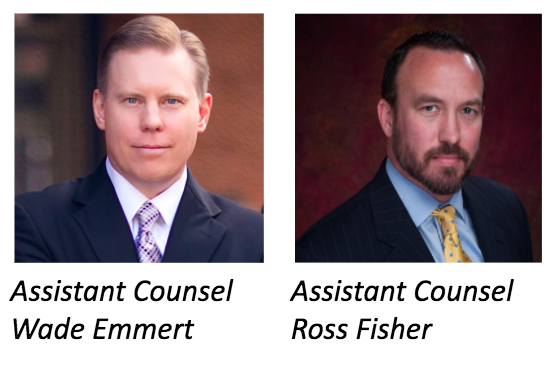 I was honored to appoint two new attorneys to the position of Assistant General Counsel: Wade Emmert is a former Dallas County Chairman and Ross Fischer works with General Counsel Chris Gober as a part of the Gober Group. We are extremely blessed to have the volunteer support of these highly qualified individuals and I’m thankful for their willingness to serve. 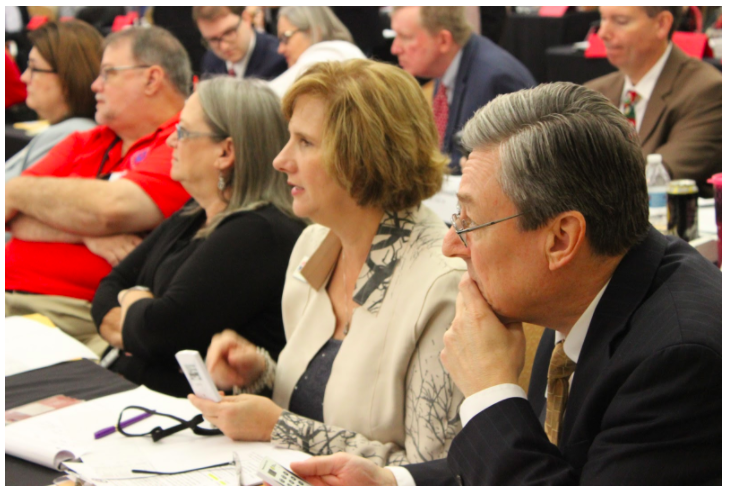 Very exciting to me was our ability for the first time in SREC history to use electronic voting.  Since a roll call vote is required for each resolution — and roll call votes are often needed or requested other times as well — this saved us an enormous amount of time and allowed us to spend our precious minutes completing actual business.

A final highlight was the SREC’s approval of a standing rule that “Staff and guests may photograph, record, and/or stream the proceedings of any meeting of the SREC or its committees or subcommittees not held in executive session.” As someone who began using facebook live to stream political meetings starting the week it was released, and having counted on many guest livestreams in order to follow important proceedings, I could not be happier with this decision. I highly encourage you to make good use of it!

I’d like to personally thank any of you who attended the meeting as a guest, watched the livestream, or spoke with your SREC members about your preferences. This type of communication with your representatives on the SREC helps ensure that you are well-informed on their decisions as they fulfill their role of running the party between conventions. Remember, this SREC term includes two more meetings (Jan. 26-27, 2018 and April 6-7, 2018), so there is still ample opportunity to get to know your current SREC representation. Find their contact information here. 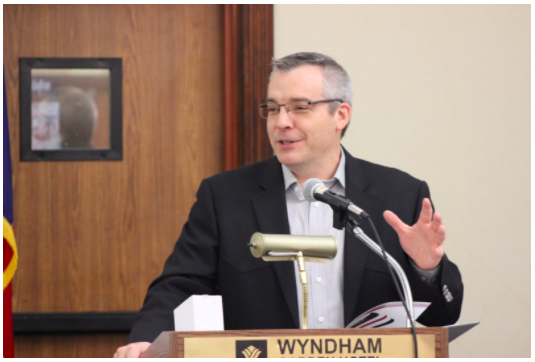 I’d also like to thank our generous meeting sponsors, Rick Green of Patriot Academy (pictured), Chad Wilbanks, Prestige Oysters, and Calpine Energy. I encourage you to join me in expressing appreciation to them and their companies for their support.

If you missed the meeting, you can review it on our archived livestream on YouTube.