Victory Texas 2010 Targets a Win for Bill Zedler in HD96

FORT WORTH–As a signal to Tarrant County Republicans of the importance of Bill Zedler’s campaign for House District 96, Republican Party of Texas State Chairman Steve Munisteri stopped by the Tarrant County GOP headquarters to make calls for Zedler this week. 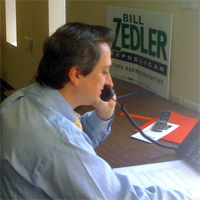 Said Chairman Munisteri, “Bill Zedler’s race against Chris Turner has become a top priority for both the VictoryTexas Committee and the Republican Party of Texas. We believe Bill Zedler is one of 8 Republican challengers who are now in a great position to turn their districts from Democrat to Republican. These are outstanding chances to knock out the Democrats in office and build our Republican majority, and this opportunity for a pickup is why the resources of both Victory and RPT are fully committed to Bill’s race. Victory has already made a substantial contribution to Bill’s campaign, but has upped the amount this week to bolster his message in these last critical days. In addition, the RPT will also direct Trailblazer volunteers to his campaign to help get out the vote throughout the election.”

Munisteri continued, “As for myself, I felt it was important to stop by and make a few calls for Bill to demonstrate the importance of this race, and to make it clear that the RPT and Victory are fully behind his efforts. We look forward to Bill adding to a strong Republican majority in the State House on November 2nd!”