What a wonderful week this has been, bringing 2017 to a triumphal conclusion as we move into Christmas celebrations! I’m thankful for an early Christmas gift of several victories secured for the freedoms that we as Republicans hold dear.

This week was the deadline for county parties to officially draw ballots for the March Republican primary election. Several exercised creativity to make this into a fun event, as you can see below! 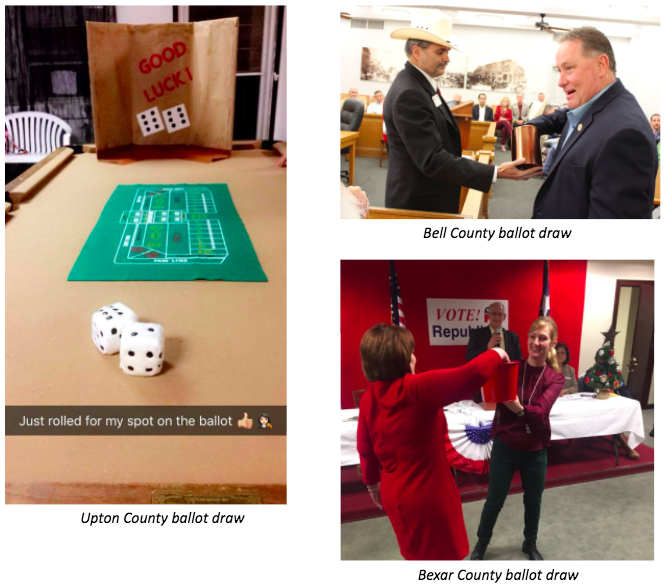 Our political team finished this year strong, outpacing engagement goals across the state and sowing early investments for the 2018 elections. The Regional Field Directors and Engagement staff held 723 “one on one” meetings this year, building a network of Republican activists that can multiply the efforts of one field staff member. Together with volunteers, our team knocked on over 22,000 voter’s doors, establishing face-to-face connections with Texas voters.

We unveiled our 85th Legislature Interim Charges tracker this week. Interim charges include many important topics that relate to the Party’s planks or priorities: health care reform, reducing the tax burden, school choice, Second Amendment rights, and religious freedoms. Most of these hearings include time for public testimony, and we need your help to make an impact. Sign up for our Strategic Texas Action Team (STAT) and see all the information about hearings HERE.

We celebrated the nationwide gift of tax relief and are thankful for President Trump and Congressional members making good on their promise to fight for tax reform.

We were successful in courtroom battles this week. When Congressman Blake Farenthold requested to be removed from the Republican Primary ballot, we sought to grant that request. But the Democratic Party filed a lawsuit against us claiming they did not think it was “fair” that we were exercising our rights as a Party. After they lost in their first hearing, they realized that they were boxed into a position where they might be forced to show us all their battle plans AND pay our legal fees, so they dropped the lawsuit. I’m thankful that the Party has excellent legal representation who were ready and able to successfully defend our freedom of association.

Merry Christmas to you and your family!