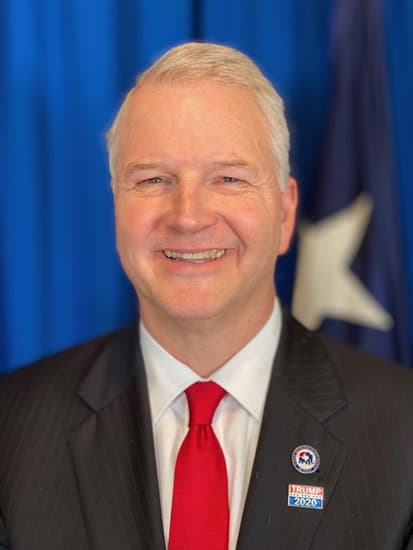 The Republican Party of Texas (RPT) is organized to enable everyday Texans to make a Texas-sized positive impact on our political future. To elect Republicans who will enact our shared principles, resulting in better outcomes for all Texans, enabling us to elect more Republicans who will enact our shared principles. That inspired James Dickey to become involved and represent the RPT – as a precinct, senate district, state, and national alternate delegate and delegate.

James was elected Precinct Chairman and twice elected County Chairman of Travis county – one of the six largest counties and most heavily Democrat counties in Texas. He led the successful entry of the Party into city council and school board races and significantly increased the Party’s minority engagement efforts.

Elected RPT Chairman in 2017 and re-elected in 2018, James has delivered consistent growth in every area of the RPT’s operations – fundraising, communications, voter registration, candidate recruiting and training, elections and legislative advocacy. Under Chairman Dickey the Republican Party of Texas reached an historic $4.7 million cash on hand for the first time ever and is implementing a massive campaign to grow Republican leadership in the state and deliver Texas’ 38 electoral votes to President Trump.

James grew up in Fort Worth, was valedictorian of his high school class, earned Bachelor’s degrees in Political Science and English from Stanford University and a Masters in Business Administration from Baylor University. During his 30-year career in insurance and technology he held executive positions in sales, marketing, product management, and operations and co-founded three companies. He and his wife Lynda have been married for 31 years, have 3 children and live in the beautiful Texas hill country outside Austin.