Before a standing room only, packed house of reporters, officeholders and party officials, RPT Chairman Steve Munisteri today led off a press conference announcing that State Rep. Allan Ritter and State. Rep. Aaron Peña were switching to the Republican Party.

In his remarks, Chairman Munisteri noted that the Republican Party has been revitalized as evidenced by the fact that the party increased its numbers in the House of Representatives from 77 to 99 on November 2nd, achieved a net gain of 300 new officeholders statewide, and hopes to continue its gains in the future. Munisteri then went on to note that our statewide elected officials deserve much of the credit for the success on November 2nd, and made special mention of Lt. Governor David Dewhurst establishing a “Rainy Day” fund for the RPT, as he introduced the Lt. Governor. 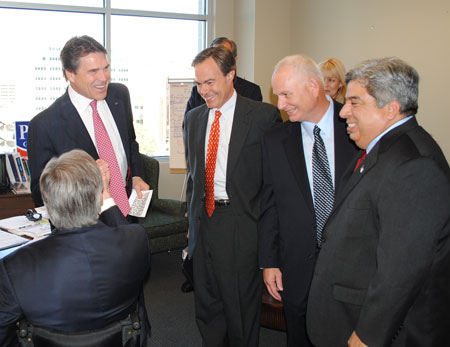 Lt. Governor Dewhurst then introduced Governor Rick Perry, who noted how “people are increasingly drawn to our party’s conservative values at a time when liberal excesses are threatening to drag our country under.” Governor Perry continued, “Today’s announcement echoes the message sent by voters on November 2nd that tough choices are necessary. these two leaders are no strangers to tough choices, they’ve made a lot of tough calls throughout their careers. To be honest, they’ve always stood out as remarkably conservative, compared to other members of their former party.”

Governor Perry then introduced Speaker Joe Straus who greeted the crowd and the new Republican representatives. “I’m thrilled to be joining all of you today to welcome two of our House collegeaues. We are thrilled to have you in our family. Joining the party of smaller government and fiscal restraint – the party that works to create private sector opportunities and rewards individual initiative.”

Speaker Straus then first introduced Rep. Allan Ritter of Nederland, who acknowledged his wife Peggy before giving a heartfelt speech. “I’ve watched my district go from solid Democrat, to a heavily solid Republican district. I spend my time listening and I know what my voters, my constituents have told me. I look forward to working with all of our colleagues… We’re all here to do a job. I look forward to doing the right thing for the State of Texas and the right thing for Southeast Texas.”

Speaker Straus then introduced Rep. Aaron Peña, calling him “a voice for those who have been without a voice.” Said Rep. Peña, “Ever since I was a kid, I was raised with certain values that are fundamental to who I am. As I have watched politics, I’ve noted that the Democratic party has gradually moved away from those core values.” Peña continued, “What I learned as a child, what I learned from my parents and grandparents – is reflected in the values and principles of the Republican Party of Texas.”

Chairman Munisteri said, “Today’s announcement of two Democrats switching to the Republican Party was the result of a team effort between Governor Rick Perry, Speaker Joe Straus, myself and numerous House and Senate members, as well as local party officials.” 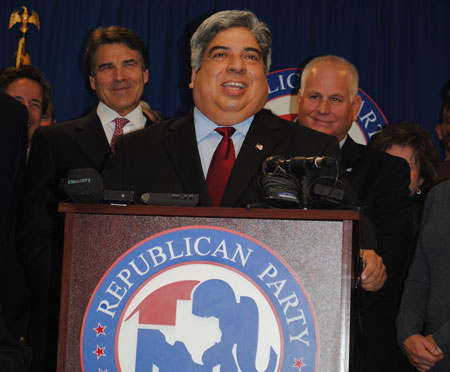 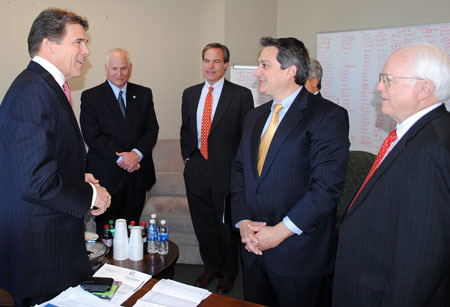