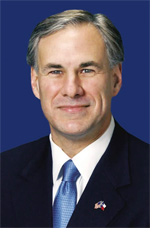 The Republican Party of Texas and the State Republican Executive Committee wish to thank Texas Attorney General Greg Abbott for his generosity in sponsoring our upcoming meeting the weekend of December 3-4, in Austin, TX!

Attorney General Abbott has stepped up to the plate in a big way for the RPT by donating $5000 to cover the costs of holding this two-day event. The donation is just part of a $25,000 commitment General Abbott pledged to the RPT back in June when he joined the Chairman’s Circle.  Said RPT State Chairman Steve Munisteri, “It was a tremendous honor for us to receive this support from Attorney General Abbott. As our SREC gathers together to chart the course for future Republican victories and plans for the upcoming year, it is a great blessing to know that we have such a strong ally in our work from a true Texas patriot like General Abbott. I sincerely thank him for his sponsorship and for investing these resources with the RPT to support our efforts.”