The State Convention this week marks the end of the current SREC term, and therefore this is an appropriate time to report on the current financial status of RPT. We’re also including a recap from the past several years for comparison.

This information is largely drawn from reports previously provided to all of the SREC members for our monthly Officials Committee budget review meetings. Please note that these meetings have all been called in open session, not in executive session, so that any Texas Republican who wished could listen in and/or view all of the charts on the screen during the meeting.

The State Party has multiple bank accounts in order to properly account for its various funds. Some are “unrestricted” — meaning that they can be used for a range of purposes as designated by RPT’s budget and current needs. Please see section 2 below for reports on unrestricted cash on hand.

The Party also has several types of restricted funds that cannot be used for any other purpose than the designated one. These include the following:

This account holds funds received from candidates’ filing fees and may be used only for purposes of conducting primary elections. The Secretary of State provides guidelines as to which expenses may be paid out of primary funds, including percentage of applicable staff salaries, rent for office space, and more. The RPT adheres precisely to those guidelines.

The Primary Election season lasts from fall of an odd-numbered year through the beginning of summer of an even-numbered year, covering all of filing period, elections, run-off elections, recount period, canvassing, and election wrap-up. Any funds remaining in the Primary fund at the end of the primary season are disbursed to the Secretary of State since they cannot be used for any other Party purpose.

The Victory Account holds funds given in order to promote Republican candidates to win Republican elections. Victory fundraising is handled completely outside of normal RPT fundraising and is the duty of the RPT Victory Chair, working in coordination with RPT Chairman and staff. This year’s Victory Chair is Senator Dawn Buckingham.

The Victory account typically receives most of its funds over the summer and fall of an even-numbered year leading up to the General Elections. Funds are paid out for promotion of various candidates and Victory operating expenses throughout the duration of Victory.

Candidate Resource Committee raises funds exclusively for the purpose of electing candidates in district or county and below races. This is needed to expand our bench and advance the Republican Party in down ballot races. This fund is restricted under SREC Bylaws.

The Texas Ethics Commission and Federal Election Commission reports make no distinctions between the kind of donations received. Those reports therefore reflect the correct total amount raised by the RPT for a given period, but give no indication as to whether those funds were for Victory, CRC, Convention, etc. Also, total receipts vary wildly depending on whether we are in an election year or not, and if in one, whether it is a Presidential or Gubernatorial election year.

Our unrestricted funds, by comparison, may be used for various purposes and are primarily used to pay operating expenses such as office rent, staff salaries, consultants’ fees, equipment, travel and related expenses. (See section #4 below for specific budget categories and amounts.) These funds are divided into Federal, State and Corporate accounts, as applicable by the person or entity giving each donation. Federal Election law puts a limit of $10,000 per individual per year on Party donations; any donations above – and certain other donations – must go to a State account. State account funds have certain restrictions — including that they must be used for state race expenses (i.e. not for Congressional elections or RNC events, etc.). Separately, non-Convention Corporate donations have limitations as to when they can be received and spent.

Our Accounting Department maintains separate Federal, State and Corporate accounts and ensures that funds are deposited into and paid out of each in accordance and comply with all Federal and State campaign finance laws.

Unrestricted cash on hand, as mentioned above, can be used for various purposes as designated by RPT’s budget and needs. Every time our accounting department has a set of invoices preparing to come due, requiring them to write checks to settle accounts, they pull a “cash availability” report to let us know how much we have currently in each account, and how much we’ll have after the planned checks are written and fulfilled.

For those reasons, a single “cash availability” report is not an accurate picture into the party’s financial status. It in no way reports on whether a major donation was just received — or if it was received a day later. It also doesn’t give the full picture of whether major monthly expenses such as salaries or rent were just covered, or are just around the corner.

However, a multi-year comparison of cash on hand accounts can provide a solid comparison of the Party’s financial state and direction (especially since it focuses on funds available for operations and is not distorted by convention or election periods or types).

Here is an overview of our cash availability reports as of the last report each month over the past 6 years, covering 3 SREC terms:

As you can see, we are headed into convention with unrestricted cash at $656,485.

At our monthly budget review meetings throughout 2018, which have all been held in open session, we have reported to Officials Committee members our fundraising amounts by category for previous month. We’ve pulled together several charts for our use and for their observation to compare fundraising numbers to previous years.

We make every effort to compare “apples to apples” — that is, to compare similar segments of time. For example: convention years will have completely different fundraising stats than legislative years. During legislative session, the legislative dinner is understandably a much larger event than when the legislature is out of session. During Presidential election years, fundraising will track in higher numbers than in gubernatorial years. And, during summer, fundraising is always at its lowest point.

Keeping that in mind, here is a chart showing fundraising by category and offering some comparison to similar time periods. 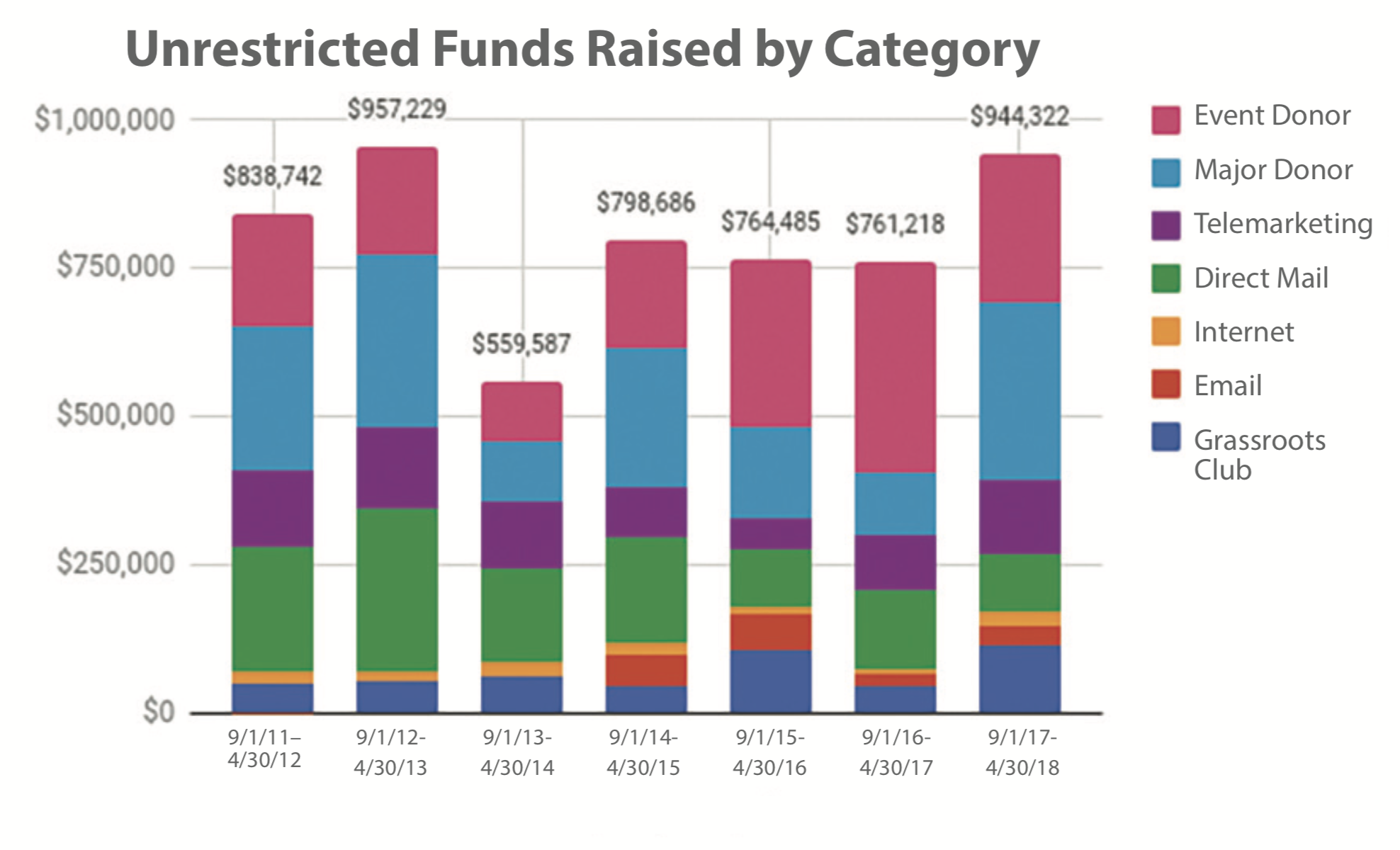 Current SREC Bylaws require that the Officials Committee develop a proposed budget each fall for the following year. The committee presents this budget to the full SREC at the 4th quarterly meeting for discussion and adoption. The budget is then used by the Chairman and Executive Director as a guide and goalpost for fundraising and expense monitoring.

Here is the 2018 budget adopted by the the SREC at their 2017 4th Quarterly meeting, along with expense tracking year to date so you can see how well we’re following the budget. In general, as you can see, expenses have been below targeted as we make every effort to make the best possible use of the funds generously given to us by our donors.

The budget that is proposed and monitored is based solely on unrestricted funds. Victory, Primary, CRC, and Convention expenditures are managed separately within the limitations of their available funds raised.

For multiple reasons, including newly added — sold-out and profitable — events, our 2018 State Convention has the highest budget of any RPT convention to date. Just some of the added expenses include new and expanded features such as the committee livestreaming, charging stations for your electronics throughout the convention center, plank-by-plank voting, and the interactive convention app.

The exact total cost will not be known until we finish settling final accounts after convention, but it is expected to be between $1.5 and $1.6 million.

Final revenue numbers will also not be known until after convention is over, but we are pleased to report that as of June 3, we had already collected over $1.4 million and expect the convention to be at or near breakeven. As former Chairman Munisteri stated, being able to put on convention is a requirement – being able to do so while covering its costs is a rare occurrence and grounds for significant celebration.

As fiscal conservatives, the staff, SREC, and RPT Officials are constantly working to improve all of our operations, including our fundraising — and the transparency and visibility we provide into those areas for our delegates and donors. We appreciate your support, take seriously our stewardship responsibility, and welcome any questions you may have.

Note: The numbers and information presented in this post are as reported by:
Director of Accounting, Jennifer Stoner and Treasurer, Larry Hicks.

The graphs and tables were compiled by others based on that source information.