In the presentation, Munisteri unveiled a series of exhibits documenting that McReynolds true residence is outside of House District 12, in San Augustine, TX. Presented at the event were: a copy of San Augustine County tax records indicating that McReynolds has claimed a homestead exemption on his farmhouse in San Augustine, photo surveillance of his farmhouse with his vehicle and State Official license plates parked in front, photos of McReynolds' unoccupied apartment in Lufkin, and a hand-written, signed document from McReynolds himself, representing his address as San Augustine, TX from a sign-in sheet filled out at a Chireno ISD school board meeting in April, 2010. 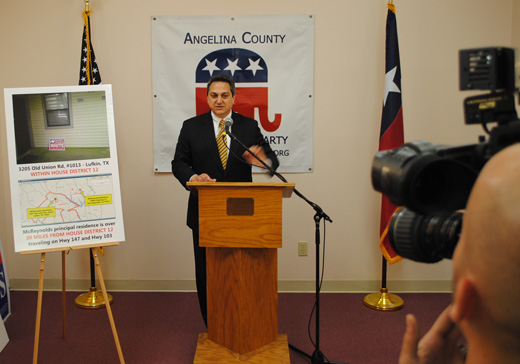 Said Munisteri, "Our Texas Truth Tour revealed to the voters of HD12 that Rep. McReynolds on one hand, claims an exemption for property as his homestead, taking advantage of the Texas Tax Code for property that is clearly outside his district. On the other hand, McReynolds filed a different address with the Texas Ethics Commission for the purposes of the election. I am confident the voters in HD12 are tired of this type of political duplicity. The bottom line is that Mr. McReynolds in actuality, does not live in the district that he purports to represent. In fact, if you put the address for Mr. McReynolds actual home in the Texas Legislative Council's website, the results indicate that he lives in Wayne Christian's district, as opposed to the unoccupied apartment he rents in Lufkin."

Munisteri continued, "If Jim McReynolds has a desire to stay involved in state politics, I would encourage him to contact his state representative, Wayne Christian, since Rep. Christian represents his home in San Augustine. House District 12 voters deserve to have a State Rep. who actually lives and works in their community, and McReynolds has not fit that description in the many years since his Democratic counterparts redistricted him out of HD12 in 2002."

"Carpetbagging can get quite expensive. Faced with a difficult election against Republican James White, its unfortunate for McReynolds that he must drive over 30 miles from his home in San Augustine to reach the closest borders of House District 12. A victory by James White this November would not only give HD12 residents a representative who lives in their community, but would save McReynolds a considerable amount of both time and mileage." concluded Munisteri.

HD12 is a priority pickup opportunity for the Republican Party, and one where the Party has already directed significant resources. Current polls indicate that James White has completely closed the gap on McReynolds and is ready to pull into the lead through strong GOTV efforts in these last days.