In his statement, Munisteri said “I feel very strongly that the most recent ads put out by Ciro Rodriguez and the DCCC are nothing more than last-minute, desperate attacks designed to smear a good man and spread false information about Francisco Canseco in an attempt to prop up the failing campaign of Ciro Rodriguez.” 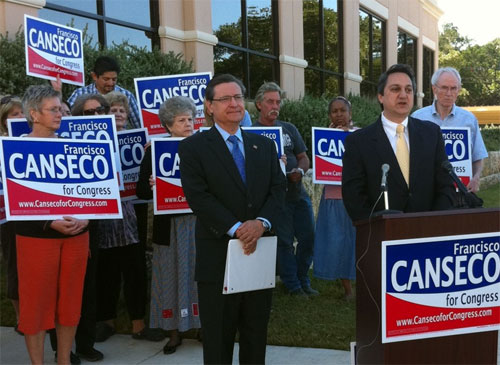 Said Munisteri, “Any sort of basic investigation into these documents and court rulings would have demonstrated that these commercials’ accusations are wholly without merit.These desperate ads make allegations that Canseco was sued by his clients. The court documents indicate that this is simply not the case. Wildly spurious allegations of “stiffed” contractors and blatant lies regarding mechanics liens, served as another attack in these outrageous ads.”

“One of my purposes here in San Antonio, is to encourage the Canseco campaign’s attorneys to seriously consider the option of suing Ciro Rodriguez and the DCCC for damages for these untrue statements. Even though it is difficult to sue for slander or libel arising out of a political race (because the standard that must be met is higher than in a normal case, namely, showing malice), I am confident that the nature of the ad itself demonstrates malice.In my mind, the option to sue is on the table for the Canseco campaign,” concluded Munisteri.

Munisteri finished the conference by announcing that the RPT is fully supportive of whatever legal action Canseco is advised to take, and that additionally, the RPT is redoubling its efforts to support his campaign. CD 23 is a priority pickup opportunity for the Republican Party, and one where the Party has already directed significant resources, including phoning, direct mail and volunteer help.Current polls indicate that Francisco Canseco is poised for victory and leading by several percentage points.