“Pass legislation to abolish abortion; including, but not limited to, enacting legislation that would ignore and refuse to enforce any and all federal statutes, regulations, executive orders, and court rulings, which would deprive an unborn child of the right to life, as well as enacting life-saving legislation such as PreNDA or a ‘heartbeat bill.’ Completely eliminate funding for Planned Parenthood and their affiliates and prohibit their physical and digital presence in our schools.”

“This year marks the 45th anniversary of the Supreme Court’s Roe vs. Wade decision. More than 60 million abortions have occurred in the US alone since this date in 1973. When will Americans say enough is enough? I am proud to stand with my fellow Texas Republicans firmly on the side of LIFE. The Republican Party of Texas not only affirms the value of innocent life from conception to natural death, we made the abolition of abortion a legislative priority in the state.”

“Every election cycle we see it, conservatives all across the land boasting of their unwavering pro-life-ness. Yet right here in the great State of Texas, abortion remains perfectly legal. The people have grown tired of the same old excuses. The government’s very first job is to protect human life, not carry out the demands of unconstitutional court rulings. Our state officials need to stand on their principles once and for all, and firmly tell the feds that Texas will comply no more.” 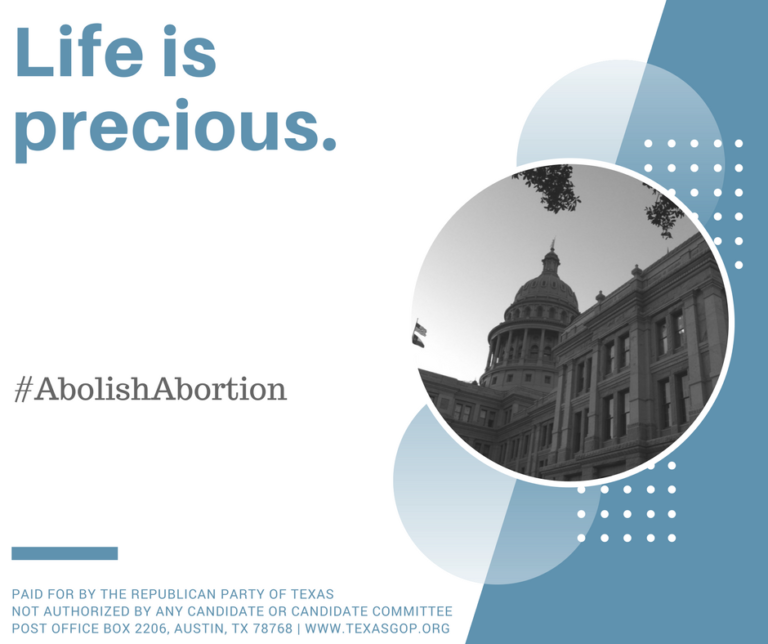 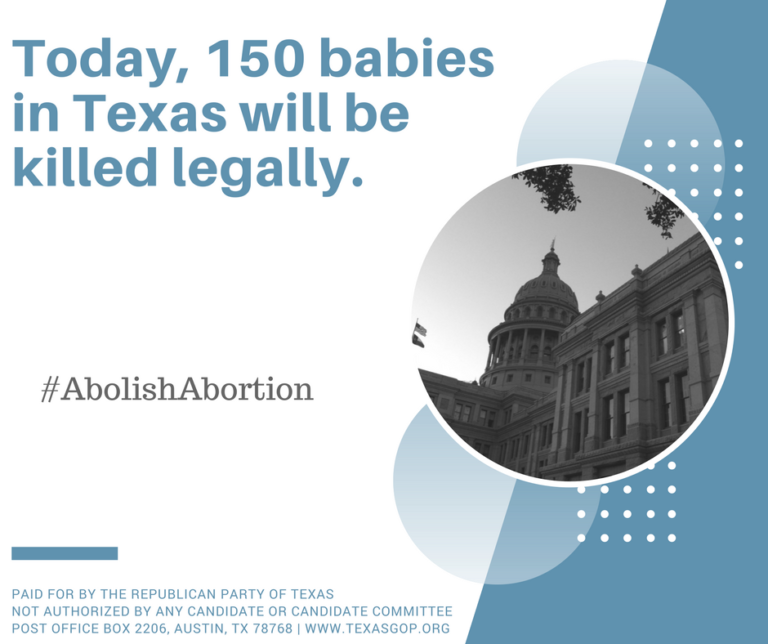 Texas needs to draw a line in the sand

The leading cause of death in Texas is abortion.

Murder is illegal at every other stage of life. Preborn babies deserve equal protection.

The state’s duty to protect ALL life should not depend on federal courts. Our leaders swear an oath to constitutions, not a court. If Colorado, California and other states can defy unconstitutional federal laws for marijuana, why can Texas not resist the unconstitutional opinion of an unelected federal court to save the lives of over 55,000 Texas babies every year? If those states can do it for plants, we can do it for people.

Until then, we should pass incremental legislation that works within Supreme Court abortion jurisprudence, like legislation to prohibit certain discriminatory abortions or after a heartbeat is detected, or to prohibit Planned Parenthood from receiving public benefits or from being in our public schools.

Finally, I call on us to extend compassion and grace to expectant mothers. All human life is precious. Our society should honor, respect, and protect the life of each mother, father, AND child — from fertilization to natural death.

Together, we can eliminate the leading cause of death in our state.