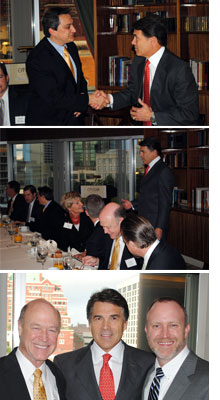 FORT WORTH– A fired-up and enthusiastic Texas Governor Rick Perry, laid out a strong case for why he should be re-elected at a Republican Party of Texas breakfast Thursday morning at the City Club in Fort Worth. In top form, Governor Perry explained why Texas has fared better than the nation as a whole during these difficult economic times. He cited his long list of accomplishments as Governor, including past actions covering shortfalls by cutting spending rather than raising taxes, establishing a rainy day fund and helping to create an economic climate that attracts employers.

Expounding upon a central theme of his campaign, Governor Perry pointed out that Texas has more Fortune 1000 companies than any other state in the union, and that Texas has created more jobs than all the other states combined. He was particularly proud of justice reform that has resulted in the state attracting a large number of new physicians to the state, including numerous counties that now have sub-specialists in areas which were previously underserved.

Chairman Munisteri stated, “It is the number one priority of the Texas Republican Party to re-elect Governor Perry. The Democrats are not competititve in any other state wide race, and are focusing the majority of their time and resources against the Governor, so it is imperative that every Republican knock on doors, and activate their friends and neighbors in support of our Governor.”

The breakfast event was a strong success, and raised $23,000 towards the RPT’s efforts for Republican victories up and down the ballot this November.

“I wish to thank the Governor for his strong support of the Party. He was very generous with his time, considering the demands on his schedule for his own campaign. We also are very appreciative of the cooperation we received from his campaign staff and consultants, especially Rob Johnson, Kevin Lindley and Dave Carney.”