The Republican Party has been very active in El Paso in the month of April!  RPT Chairman James Dickey, First Lady Cecilia Abbott, and RPT Vice Chair Amy Clark have all made their mark in the El Paso community recently, we’re proud to share with you their news.

RPT Chairman James Dickey traveled and spoke with the El Paso GOP about the success of the Republican Primary and how we need every conservative to join our fight to keep Texas red!

There were even reports from Univision and Telemundo about his visit in El Paso, and how the Republican Party is stronger than ever.

“We want more people to be part of the Republican Party, we are making our message known, we have people working in all the communities of the state.” – Chairman James Dickey

But we need your help to stop the blue wave crossing our nation.  The Democrats have won EVERY special election since the 2016 election, and TEXAS is the main thing standing in the way between the Democrats keeping the White House for generations to come.  Join our fight and join our team!

Cecilia was honored to be welcomed by so many volunteers and supporters yesterday in El Paso. They’re working hard ensure a conservative victory in November.

Vice Chair Amy said, “I have always believed that as Republicans our charge is simple: we must be the salt and light. We must lead with conviction, and we must lead intentionally. After all, leading by example is the most powerful catalyst in winning over hearts and minds.

When we serve one another, we are practicing what we preach: that limited government and personal responsibility is the key to unlimited opportunity and freedom in our society.”

And the El Paso community came through in a big way! 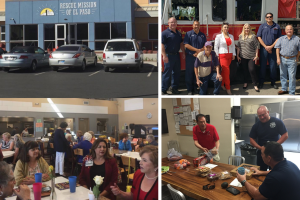 The El Paso County Republican Party thanked and served their local firefighters while the El Paso Republican Women helped at the Rescue Mission of El Paso.  God is good!

RPTServes is not just a weeklong initiative. It’s year-round, and it’s a mindset of continually serving our communities. If you would like to become part of RPTServes efforts or lead an effort in your area, please sign up below, and we will reach out to you as soon as possible about setting up a volunteer effort in your area.

Oops! We could not locate your form.