Early Voting is Here – Get Out and Vote!

You Can Cast Your Ballot Through Friday, October 29

Many counties in Texas saw record breaking turnout on Monday, the first day of Early Voting. News reports have indicated that turnout is way, way up in the major metropolitan areas over the last gubernatorial election in 2006. All indications are that the conservative Republican base is fired up, and getting out to vote in support of our outstanding GOP candidates, but we must keep up the fight!

Your Republican Party of Texas officials and leadership have already voted and moved back on the campaign trail to victory! On Monday morning, our Republican statewide elected officials and candidates all joined together in South Austin to hold an Early Voting rally and cast their ballots! Participating in the event was RPT Chairman Steve Munisteri, who addressed the overflow crowd of candidates, media and GOP activists. 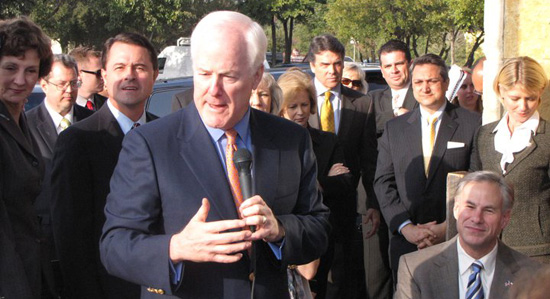 With Election Season already here, RPT’s Outreach Director Justin Hollis has been working with Republican and conservative groups around the state to get volunteers on the ground for our statewide block walks going on through our Texas Trailblazer program. Additionally, the RPT has set up a phone bank in our offices, which is running through the election this week and next. The TFRW, YCT and Travis County Republican Party have signed up to make phone calls for the party.

In addition to this outreach activity, Justin has also been working with organizations to hold outreach events throughout the state. The most recent event was done by GOPisForMe and the Hispanic Republican Club of McLennan County. These organizations held a Hispanic Political Focus Group in Waco on October 12th, helped funded by the RPT in order to get a better understanding of the issues that matter most to the Hispanic Community.

Justin continues to work on organizing other events before and after Election Day as well as providing funding and assistance in literature. Our statewide Outreach calendar is complete and will continue to have events added to it. The next step is to send people out to these events to talk about the Republican Party of Texas. If you are interested in being a surrogate please email Justin at jhollis@texasgop.org.

The New Texas Forum Is In Circulation

The New Texas Forum is hot off the presses and already, thousands of copies have been distributed across the University of Texas campus here in Austin. The site has continued to grow over at www.NewTexasForum.com and RPT Youth Outreach director Austen Bailey continues to recruit new writers and readers on a daily basis. 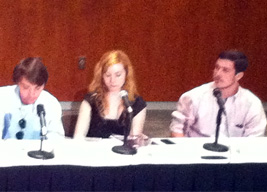 Last Thursday night, Austen was invited to participate in a panel at the LBJ School of Public Affairs on the UT campus, discussing the role of media on college campuses and beyond. The sole conservative representative on a five-person panel, and also the youngest – Austen did a tremendous job representing the New Texas Forum and conservative values – well done!

Remember, Austen is still looking for students and young people between the ages of 18-30 to get involved with our “Young Guns” youth volunteer program. The Young Guns is a specific volunteer group designed to bring young people together to help elect Republicans this November by blockwalking, phonebanking, and talking to your peers. Students, if you would like to get involved, or parents, if you have a young person who would like to help out the conservative cause and keep Texas red, email Austen at abailey@texasgop.org or go to our volunteer page and designate that you would like to be a part of the “Young Guns!”

Please consider supporting the Republican Party of Texas with your financial contribution, and sign up to be part of our statewide blockwalk with the Texas Trailblazers! Now more than ever, we need you working beside us to help keep Texas strong, free and prosperous. Join us today!