Making good on their pledges, Rep. Rob Eissler and Rep. Jim Pitts both contributed the generous amount of $10,000 to the RPT, and Rep. Dwayne Bohac also sent in a pledge he had previously made. In addition, Rep. Will Hartnett, joined the DebtBusters committee and sent in his first contribution as well. Rep. Tryon Lewis (pictured giving Chairman Munisteri a check below) had previously already given to the DebtBusters committee, but generously agreed to sponsor the March SREC meeting by contributing an additional $7,500 which he personally delivered to RPT headquarters over the holidays. 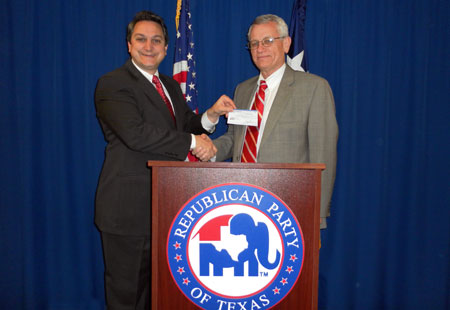 Another nice Christmas surprise was the receipt in the mail of an unsolicited contribution from former State Party Chairman and former Secretary of State George Strake. Strake had already previously given, so the receipt of a second check was an unexpected surprise.

Chairman Steve Munisteri commented on these contributions by saying “Despite the RPT having completely paid off its debt, in large part due to our DebtBusters committee, the DebtBusters remain active in helping ensure that we don’t slip back into debt in the future as evidenced by their recent contributions. These contributions were particularly appreciated since we planned no formal fundraising activities during the month of December, so their contributions enabled the RPT to cut its anticipated December cash drain in half. I am most appreciative for their help and committment to the party. I was also particularly honored to receive a second check from Chairman George Strake. I served under him when I was a member of the SREC during the mid-80’s and it is undisputed that he was an excellent chairman, a solid conservative and a dedicated Republican.”