Events, Updates from the Chairman

The month of January brought with it a lot of news, including the opening of the 86th Legislative Session, several special elections, a new Speaker of the Texas House, and much more. We have continued to prepare for the battles ahead and 2020 by looking into new strategies and processes to engage more Republicans than ever before. I spent much of my time meeting with Republican elected officials to hear their concerns and to find out how the Republican Party of Texas can help them both during the 86th Legislature and in future elections. We also had the opportunity to attend the Republican National Committee Winter Meeting where we re-elected Chairwoman Ronna McDaniel to another term. It has been a full and productive month.

Shortly after the new year, Texas’ 86th Legislative Session was called to order. Several Republicans were sworn in for the first time to represent the districts which elected them. The Texas House also elected a new Speaker – Representative Dennis Bonnen of Angleton. He has already shown he will be an effective Speaker and is willing to tackle issues like property tax and school finance head on.

Following the opening of Session, Governor Greg Abbott and Lieutenant Governor Dan Patrick were inaugurated. They hosted several events including the Abbott Grassroots Reception and the Inaugural Ball – headlined by the King of Country, George Strait! This gave me a good opportunity to speak with grassroots activists, donors, and elected officials about the Republican Party of Texas’ plans during this Session and for 2020. 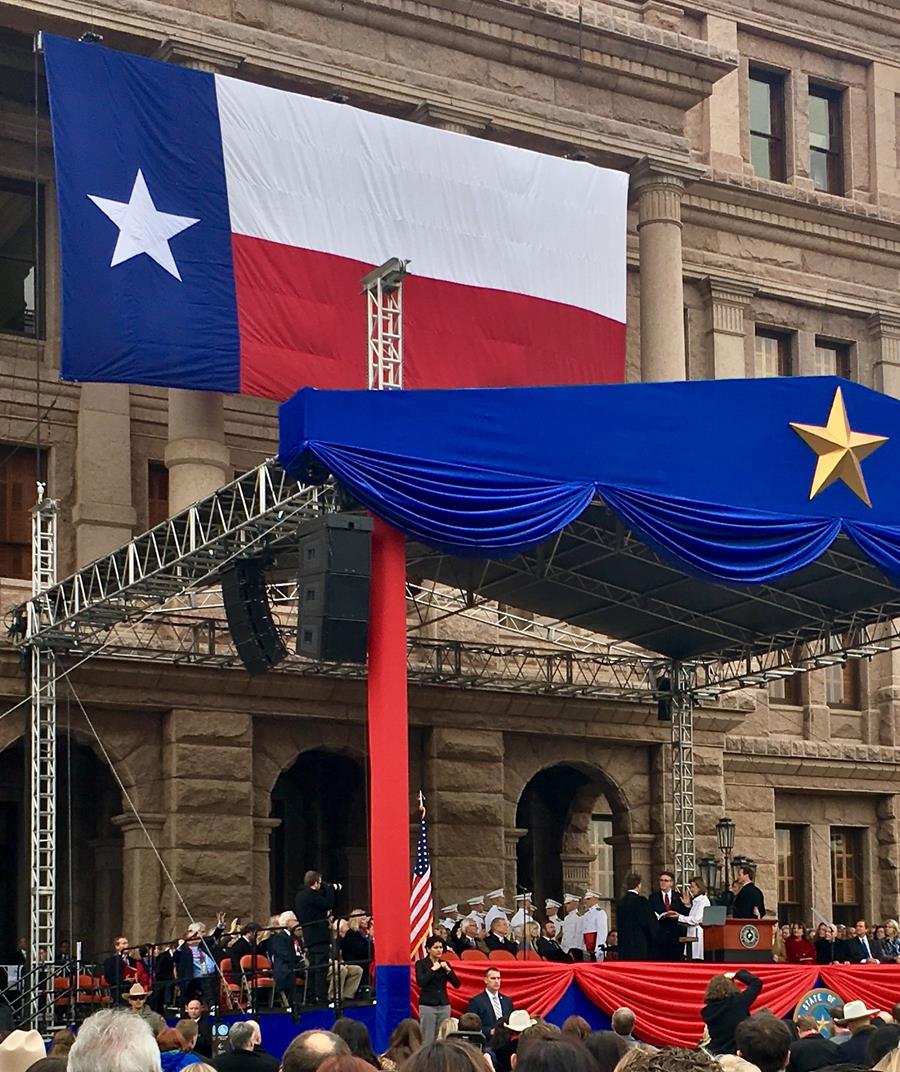 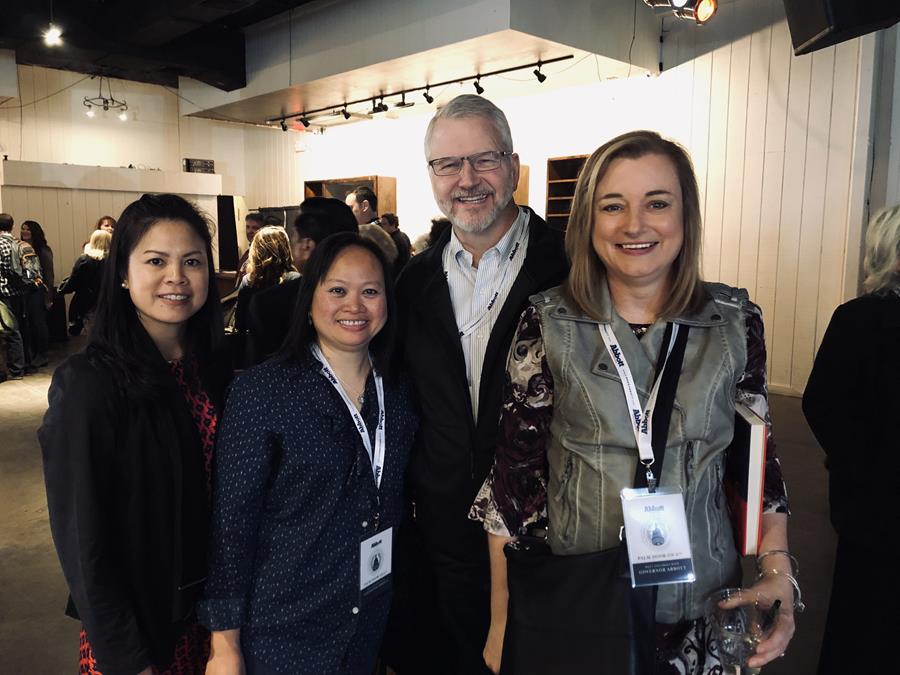 During the month of January, we also hosted a new member orientation at the Republican Party of Texas headquarters with our new elected officials. We discussed what they would like to see from the RPT and how we can help them. Thank you to Rep. Steve Allison, Rep. Keith Bell, Rep. Brad Buckley, Rep. Cody Harris, Rep. Ben Leman, Rep. Mayes Middleton, Rep. Reggie Smith, and Rep. Steve Toth for attending or sending a representative on your behalf. We look forward to working with all of our elected officials to accomplish the policy goals that Texans need! 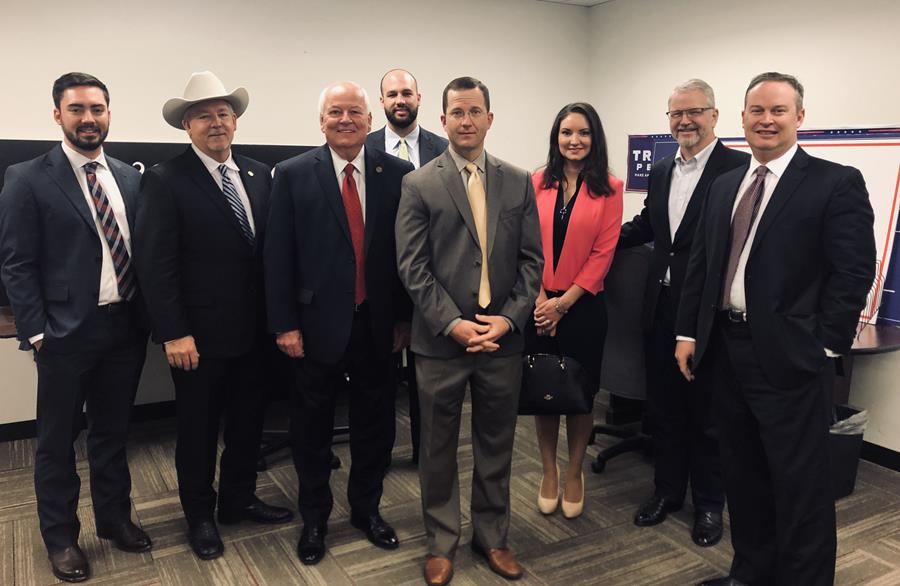 On January 18th, we sat down with the Texas Secretary of State’s team and the Texas Democrats to discuss the upcoming elections. We discussed many items, especially the wait times at polling locations in 2018 and what we might do to expedite the process in the future. While we are happy that 2020 marks the elimination of straight ticket voting in Texas, the consequence – in conjunction with an enormous anticipated turnout – will likely be long lines at polling locations. We discussed potential solutions for this while still ensuring that all election laws are followed. We look forward to working with the Texas Secretary of State to ensure that citizens registered to vote in Texas are able to do so in the most efficient way that still ensures ballot integrity.

I had my first opportunity to meet with the House Caucus as a group and with the Speaker and several other members. These meetings were an important first step towards the kind of productive partnership needed this cycle between the party and all of our elected officials.

I was fortunate to have to the opportunity to travel to Tomball to meet with the Yellow Rose of Texas Republican Women. It was great to see current and former SREC members as well as many active and engaged Republicans who are ready to work toward electing Republicans throughout the Tomball area.

It was a pleasure to attend the training on January 19th in Uvalde which was organized by Marian Knowlton, both our Atascosa County Chair and our SREC SD 19 Committeewoman. Uvalde County Chairman Jeff Santleben and the Uvalde County Republican Party were excellent hosts for this event and we particularly enjoyed hearing from State Senator Peter Flores.  Our Organization Director Brandon Moore, San Jacinto County Chairman and TRCCA Vice-President Dwayne Wright, and Jon Williams with Cool Conservatives PAC all had excellent presentations.

The RNC Winter Meeting took place January 23rd-25th in Albuquerque, New Mexico. During the meeting we elected Chairwoman Ronna McDaniel to another term leading the RNC and elected Texan Tommy Hicks as Co-Chairman. I’ve had the privilege of knowing Tommy for years and I look forward to working with him as we fight to defend Texas in 2020!

We also had the opportunity to present the case for a significant increase in the RNC’s investment in Texas. We can no longer take Texas’ 38 electoral votes for granted and must vigorously fight to defend them! There is no path to winning the White House in 2020 without Texas. If you would like to join the fight, text TXNEWS to 72000 right now to keep up with what the RPT is doing to defend our values! 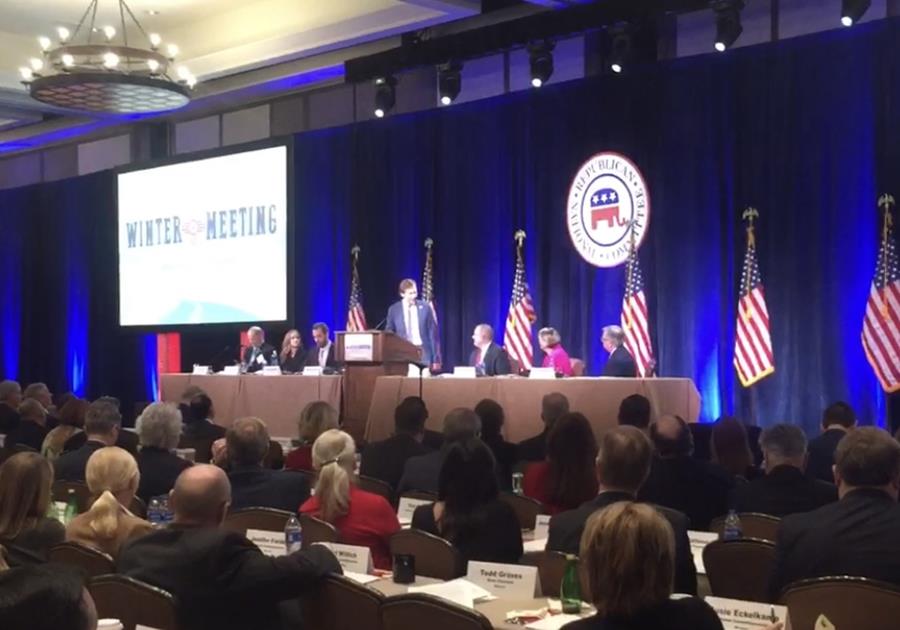 While in New Mexico, we spent time meeting with current and potential digital and technology firms that are offering innovative voter engagement and grassroots tools that will improve our efforts to build the volunteer army we need to engage voters in the coming elections.

Our thoughts and prayers go out to the family of former Webb County Chairman Randy Blair who passed away in January. We owe him a debt of gratitude for his service and dedication to our party and to our shared values. We also owe him our thanks for finding a qualified individual to take over, Chairman Bill Young. Chairman Young kicked things off in a powerful way by putting together this incredible event. We had both SREC members for SD 21, numerous Young Republicans, and dozens of potential precinct chairs. It’s incredibly exciting to see that kind of energy in what has traditionally been a blue county!

We would like to extend our thanks to Senator John Cornyn for joining our montly County Chair conference call and updating our County Chairs on what he is seeing in D.C. He also discussed the challenges he knows we face in Texas in 2020. We look forward to working with Senator Cornyn to ensure we elect qualified Republican leaders across the state of Texas.

During the month of January there were two Special Elections: Texas House District 79 in El Paso and Texas House District 145 in Houston. We had Republican candidates in both races. In HD 79, Hans Sassenfeld stepped up to run in a heavily blue district and showed the importance of challenging Democrats for every seat. In HD 145, Martha Fierro ran a hard campaign in yet another heavily blue area and did an excellent job of exemplifying Republican values. Thank you to them both for their service.

As we approach 2020, we know that we must prioritize candidate recruitment so that we can challenge every incumbent Democrat in Texas. We cannot allow any Democrat to coast through the General Election. Our message of quality education, property tax reform, and maintaining our booming economy is one that will resonate with all who hear it and we owe it to all Texans to make sure it is presented in every race in every district. That is why we have created the Candidate Recruitment Task Force to be led by Hamilton County Chair Cat Parks. Chair Parks has been a strong advocate for representative government and Republican values. She is passionate about identifying and recruiting quality candidates that we need to win in 2020. I am confident she will do an exceptional job as Chair of our Candidate Recruitment Task Force.

January was a busy time for Texas Republicans. This is just the beginning, and the months ahead will only get busier as we fight for our shared values and to elect Republicans in 2020.

If you want to stay in the loop with what we’re doing, text TXNEWS to 72000 now!