Last weekend, your State Republican Executive Committee (SREC) gathered in Austin for the final time this term. The SREC consists of two members (male and female) from each of the 31 Senatorial Districts, plus the State Chair (myself) and Vice Chair (Amy Clark). This group is responsible for conducting the business of the Party in between conventions, and Saturday’s decisions included adoption of 3 resolutions, passage of a rules amendment relating to county chair elections, and denial of a convention booth.

Since I believe it is important for you to know the business of the Party, this update is a report on last weekend’s SREC meeting. You can also view the archived stream (Part 1, Part 2, Part 3) or see the agenda.

Several actionable items originated from committee reports. You can view the results of the six roll call votes here.

The Resolutions Committee recommended 3 resolutions to the body; all were adopted. Those three were a resolution on the right to keep and bear arms(vote of 57-0), a resolution supporting the electoral college (vote of 59-0), and a resolution calling on recently convicted Democrat Senator Carlos Uresti to resign (adopted by unanimous consent).

The Rules Committee recommended a standing rule and an amendment to Rule 8A, both of which were adopted after debate and an amendment. The standing rule, which affirms that RPT staff and resources can be used to support identifiable Republicans running against Democrats in municipal elections, states:

Rule 8A was amended to include smaller counties as follows:

I was thrilled that former State Chair Steve Munisteri was able to visit on Saturday. He has been working hard in D.C. in his role with the White House but it was great to see him here in Texas. He spoke of his excitement about what we’re doing, and I was able to talk about the Steve Munisteri Award instituted by Governor Abbott in 2014. Munisteri himself was the first recipient; it took us 4 years to find another worthy recipient, but we finally found her, and last Thursday Governor Abbott presented the 2018 Steve Munisteri Award to our outgoing Vice Chairman Amy Clark.

Vice Chairman Clark was also presented with a couple of special gifts on Saturday.  Jason Vaughn, liaison for our auxiliary organization the Texas Young Republican Federation, honored her with a glass-etched white rose and the inscription: “I will cling to the rope God has thrown me in Jesus Christ, even when my numb hands can no longer feel it.” Tanya Robertson (SD-11) gave her a collection of notes from all the SREC members recollecting their best memories and recording their appreciation.

Emma McIlheran, liaison for our auxiliary organization the College Republicans, presented a report on the Texas Federation of College Republicans State Convention that will be held in Austin this weekend. We’re proud of these young people’s hard work and excitement for advancing Republican principles. We also heard an update from our Auxiliaries & Coalitions committee chair on our coalition organization the Republican Liberty Caucus; at their recent convention they passed strong conservative planks including ones on pro-life stances.

The Candidate Resource Committee auctioned off two pieces of art (brought by Sue Evenwel, SD-1) and a pan of Vice-Chair Clark’s famous brownies to raise funds that will be passed on to our candidates. I was proud to secure the brownies at a steal for $500. The portrait of Reagan received a winning bid of $1,000 by our National Committeewoman Toni Anne Dashiell. And the remaining painting, “Those Damn Boots,” was won by Mark Ramsey (SD-7) for $375. 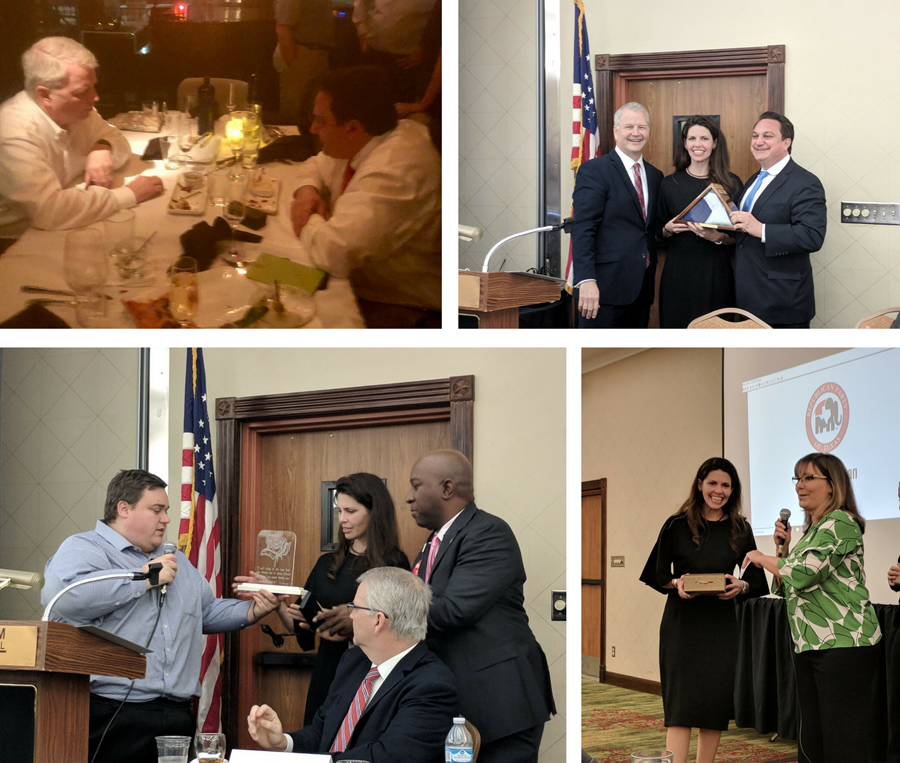 It was wonderful to have all of our Regional Field Directors in town to present in person for the SREC members!

Kristy Wilkinson, RNC State Director / RPT Political Director gave a presentation about the data-driven work being carried out by our field team every day. She showed the members the back-end of our tracking system where we can follow our team’s progress as they knock on doors, hold 1-on-1 meetings, present RLI trainings, and more. She also reiterated the importance of our Party leaders, starting with SREC members, in helping the field team to make connections in the community and asked them to devote some of their own time and energy to blockwalking in their own areas.

Then each Regional Field Director was introduced and had a chance to speak about their work. Jesse Grady drove up from Corpus Christi; Joel James came down from DFW; Mark Irey joined us from Houston; and Rommel Lopez came from the southwest Texas region that includes Bexar, Uvalde, and Val Verde counties. Huge thank you to the team for making the effort to come and share about the blood, sweat, and tears that they are already investing in the field to help Texas win in 2018! 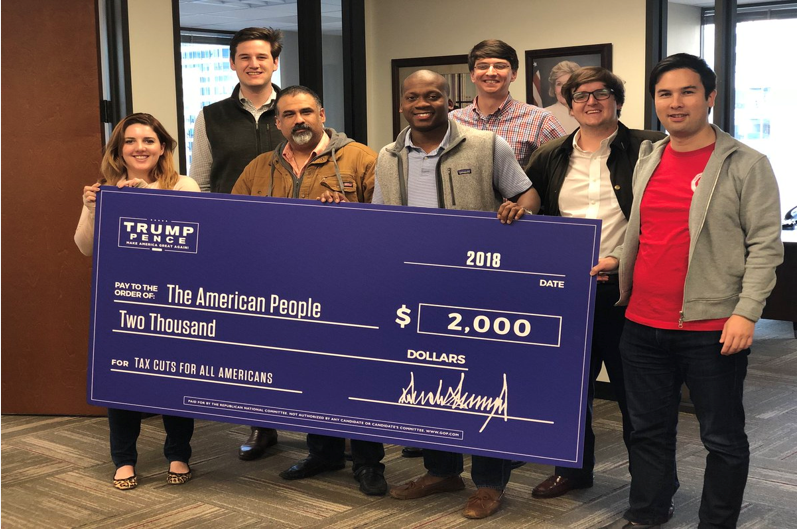 Our Treasurer Larry Hicks reported on the financial status of the Party. As of last Thursday, our cash on hand was over $548,000 – 12% higher than it was at this time two years ago. We also heard a report from the audit committee: the normal yearly audit is complete, and it was a clean audit with no issues. Many thanks to our accountants (Jennifer Stoner and John Alvey) for their hard work to ensure this result.

Our Legal Counsel Chris Gober reported that the Party is not engaged in any lawsuits or ongoing legal activity at this time. He gave insight on the challenges presented by the surprise resignation of Rep. Farenthold and noted that we have been and will continue to work closely with the Governor’s office on the details as decisions are made.

National Committeewoman Toni Anne Dashiell also spoke of RNC fundraising and reported on her work with the Presidential Nominating Process committee, which is currently discussing RNC rules and will report to the Rules committee. She is eager to ensure that NY and CA, with their huge population centers and heavily Democratic strongholds, don’t end up deciding our 2024 Presidential election. She also announced that the next RNC meetings will be in Miami, FL (May 2-5) and then right here in Austin, TX (July 17-21). If you want to be a guest, just ask Toni Anne, Robin, or me and we’ll be happy to sign your guest form, which will be available on our Facebook event pages for each meeting.

National Committeeman Robin Armstrong reported on the Democrats’ efforts to gain control of Congress; they need 24 seats to do so and have targeted 101 seats. He stated that this midterm election will be the most expensive midterm in US history, but thankfully RNC Chairwoman McDaniel has already set fundraising records and is using those funds on field operations, communications, research supporting the White House, and digital operations.

Vice Chair Amy Clark gave her final presentation as our Vice Chair and shared about the exciting projects planned across Texas for RPTServes week of action, with service events currently planned in Corpus, Dallas, El Paso, Floresville, Houston, McAllen, San Antonio, and Tyler. If you’d like to participate in those or if you’d like to volunteer to coordinate a project in your own area, please CLICK HERE for more info! Amy also shared from her heart her desire and request that we would all exercise mutual respect for each other as we discuss the things about which we are so passionate.

My report as State Chair focused on some important numbers. Those included 1,543,725 — the record-breaking Republican primary turnout; $1.1 million — the amount we’ve raised for operating expenses in the past 10 months; 150 — we’re celebrating the 150th anniversary of RPT and we have so much to be proud of; 14 — the number of paid, full-time RPT staff who run our operations and work in the field throughout Texas; and 1 — the most important number: you, each of our hard-working volunteers who make the Party a success.

In addition to the committees who originated actionable items (see above), the following committees also brought reports of their activity:

Special thanks to Chairman Todd Hunter for being our Bronze Level Sponsor for this meeting! Chairman Hunter, we appreciate your generosity to help defray our meeting expenses and hold a successful and productive meeting.